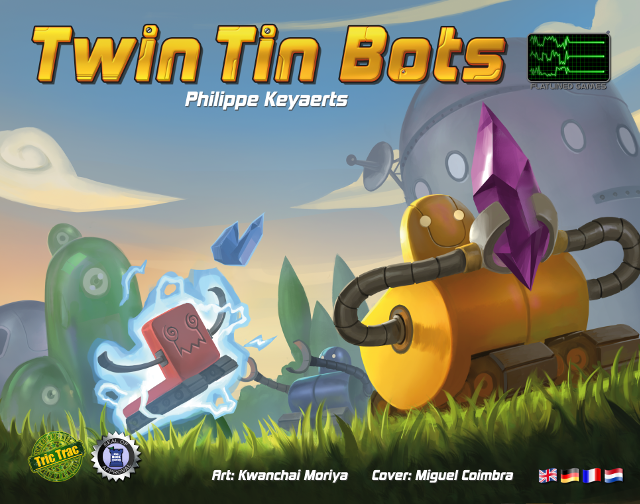 In Twin Tin Bots each player programs two robots to harvest crystals.
You use simple orders (forward, turn, harvest, unload, ...) but there are two robots to control, and only one order can be changed each turn! The other player's robots are going after the same crystals, and might push your robots or even rob crystals from them.
Twin Tin Bots is the latest game from Philippe Keyaerts, the creator of Small World, Olympos, Evo and Vinci. 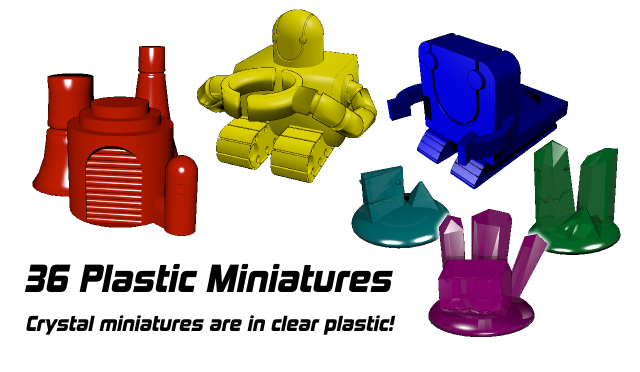 In Twin Tin Bots, you program two robots to harvest crystals and bring them into your base.

On the first turn of the game, you can play an order tile on one of each of your robots' program, and then execute it. On subsequent turns however you may only make one change to the programming.
On each turn, you can make a single program change, and then you must always run the program of both your robots, in sequence from left to right.
Even though it only allows one action per turn this clever system makes it possible to build a complex program over time. Each robot has 3 program slots available.

Please note that only one of the two robots' programs can be changed each turn. The other robot's program remains unchanged!

Each player has the same set of order tiles to program his robots : 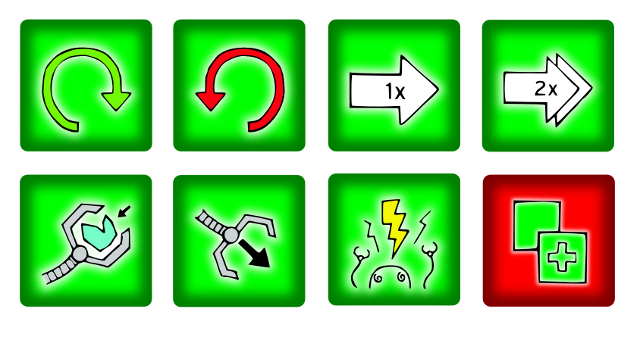 Remember, robots run their program every turn, no matter what! You can only make small changes along the way as they're rolling around on the crystal mine field.

Each time a crystal is unloaded in a base, a new crystal is put in play at the center of the arena. After all crystals have been put into play, the player who brought the most valuable crystals to his base wins.

Here is a video explanation of the game play :

Here is a video review by none other that the Dice Tower's very own Tom Vasel ! :

Here is a video review by Lance Myxter (aka UndeadViking) based on the prototype version during our Kickstarter campaign which covers the gameplay aspect and where he explains why he really loved Twin Tin Bots!

Here is a video review based on the prototype version during our Kickstarter campaign by none other that the Dice Tower's very own Tom Vasel ! :

You will only need a few turns to grasp Twin Tin Bots, and it is simple enough that children from 10 and up can play it. The game plays in under 60 minutes, even with 6 players. The player turns are very simple so game rounds are short and there is no downtime. 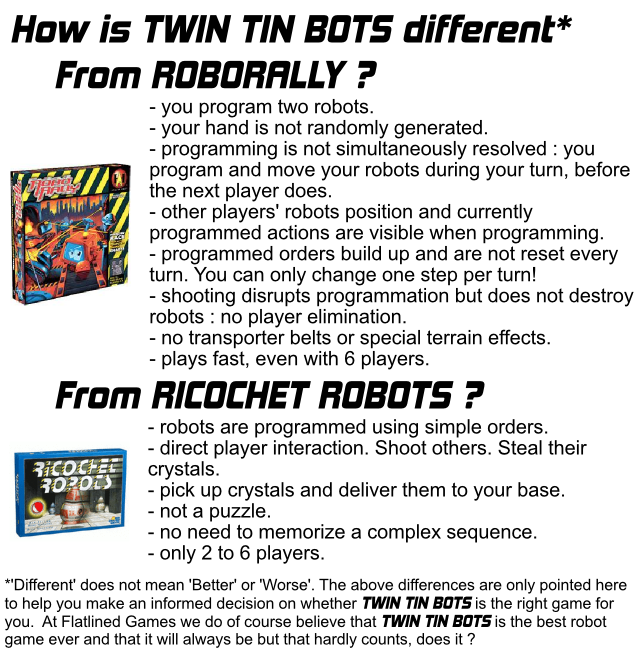 Philippe Keyaerts is a Belgian board games designer, famous worldwide for his previous titles : Small World, Evo , Vinci , and Olympos.

When not creating games, he teaches remedial courses, putting his background in social studies and his master in mathematics to good use.

Here is a video interview of Philippe Keyaerts. French language, with english captions available in Youtube (click the captions icon).

Kwanchai is a gamer as well as a talented artist from Los Angeles, and has been active on BoardGame Geek for quite some time now.

He started boardgame illustration by redesigning the artwork for Zombie in my Pocket which is now the official artwork for the game. He has also completed redesigns for Zombie Plague, Slapshot, Wiz War, Melee and Ogre.

He recently illustrated Rumble in the House and Rumble in the Dungeon, Forlorn Hope, Take the bait, and Lock n' load Heroes of the Gap. Be sure we'll see plenty more of him in the future!

In the far future of Twin Tin Bots, the main hurdle to renewable energy has been solved : energy produced from sustainable sources is now stored in high capacity crystal-based energy cells. It was discovered that crystals can store huge amounts of energy for any length of time, in a very compact volume.

In the wake of that major discovery mining corporations endeavoured to mine crystals on other planets, and many small mining operations were set up all over the galaxy. With the advent of cheap energy, advanced technologies such as the ion drive and field robotics thrived, to the point only a few humans were required to run a crystal mine.

Life in a small mining colony can be dull some days, so mining robot programmers have been known to organise friendly competitions, fielding their robots against the other corporations' programmers in a crystal harvesting race.

These rough contests usually mean some of the robots will be damaged or even sent to the scrap heap, much to the dismay of the engineers who maintain them in running order, but the spectacle is usually entertaining and it raises the daily crystal yield so no-one really complains about it.

Kwanchai Moriya brings to Twin Tin Bots a fresh universe, far from the usual grim look one would expect from a crystal mining game set in the far future. He also designed the robots and crystals playing pieces, with his unique cartoon style. 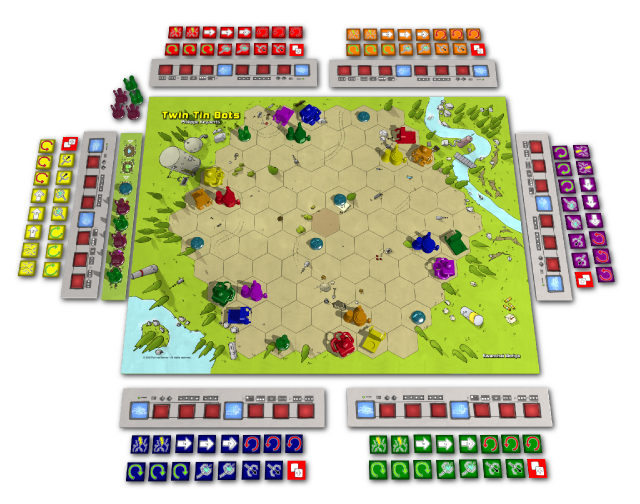 All pictures are from a prototype version, not actual game components.

Twin Tin Bots was funded on kickstarter on May 10, 2013. The official release date for the game is 'whenever it is ready'.  Our current estimate is Q4 2013.

We wish to thank all backers who helped make Twin Tin Bots a reality, as well as the following shops who pledged to carry the game on its release :