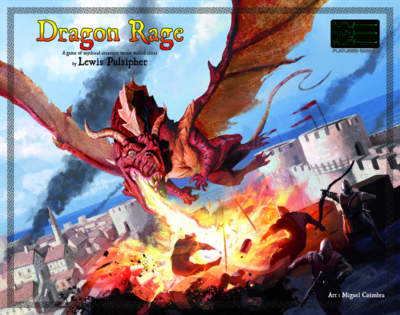 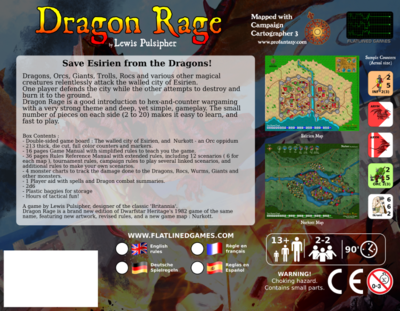 The massive and leathery creatures were already descending on Esirien, shrieking and clawing at the troops massed on the city walls.

"My Lord, they are heading to the Dungeon"

"The wizard Helmond will organize the defence on the dungeon district, send the horsemen there to help them."

As the officer dispatched the reinforcements to the dungeon district, the city leader gestured to the infantry guarding the city grounds to stay in place and be ready for the attacks. On the other towers, archers were awaiting, arrows unquivered, ready to fire.

Over the river walls a column of whirling wind and water suddenly rose, blocking the Dragon's path.

The flying monsters turned around and headed to the city grounds. A cloud of arrows formed around them as they crossed the river, and a moment later they had landed and were breathing fire on the old temple.

"Call back the horsemen!" yelled the city leader as he ran downstairs to the huge creatures, sword at the ready for onslaught...

Dragon Rage is an introductory wargame set in a fantasy world.

Dragons and other monsters attack walled cities, trying to destroy as much of the city building as they can while the city garrison fights back. Controls the invading monsters or the city forces in a mercyless struggle!

The basic game scenario has two Dragons attacking the seaside city of Esirien. The defender controls a small militia that defends the city. All troops are represented by counters on the game board's hex grid. During each game turn, each player may move some or all all his units and then fight the enemies within attack range. The humans have a local hero which has special powers, as well as a wizard that can cast spells. The dragons are very resilient and can breathe fire, destructing men and buildings in a blazing roar.

Combat is resolved trough a dice roll on a combat resolution table, cross-referencing the attacking and defending unit's strength.

Dragon Rage is a good introduction to the world of wargames : There are few units on both sides, making the game simple to learn and fast-paced. It will introduce you to key wargaming concepts such as tactical movement on an hexagon grid, units statistics printed on the counters, use of a combat resolution table, attack-to-defense ratios, terrain modifiers, reinforcements, and special abilities.

The 16 pages Game Manual has been written specifically to introduce you to the game. Its structure follows the game turn sequence so it can be used as you discover the game, playing each game phase as you read trough the manual.

Once you have mastered the game key concepts and basic scenario, you'll want to proceed to the advanced game.

The 32 pages Rules Reference manual contains all rules from the Game Manual, plus all optional and extended rules. It is organized by themes, allowing for fast reference during gameplay. Game rules are available in English, French, German or Spanish.

They also introduce Nurkott, an Orc oppidum on the other side of the game board. In Nurkott, orcs defend their settlement against all kinds of monsters and human assaults.

The optional rules introduce new units such as human catapults and ballistas or the princess Elowyn, new spells for Elementals, rules for creating point-based scenarios, tournament rules, and campaign rules allowing to link several scenarios over time. They make Dragon Rage a complete gaming system that will provide you with hours of tactical pleasure as you explore the many options the game has to offer. 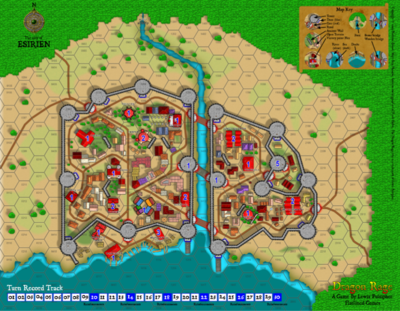 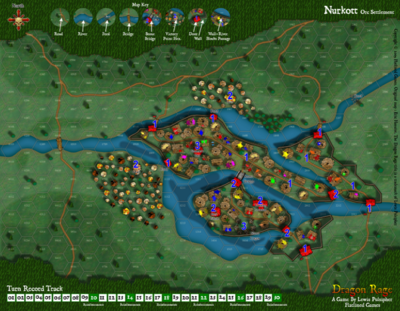 About the re-edition of Dragon Rage

As some of you already know, Dragon Rage is a reprint of an older game : Dragon Rage was first published in 1982 by Dwarfstar, an imprint of Heritage Models. Dwarfstar had financial problems, and went bankrupt shortly after the release of Dragon Rage (for reasons unrelated to the game). The result was that Dragon Rage disappeared from the market, and was never republished, to the author and the game fan's dismay.

Now, almost 30 years after the original edition, Flatlined games is proud and happy to bring this classic back on the market in a completely revised and improved edition.

The board maps for Esirien and Nurkott have been designed using Profantasy software (http://www.profantasy.com) Campaign Cartographer 3 and City Designer 3. Their software produces professional results that are both pleasing to the eye and consistent in style and detail level and the new edition of Dragon Rage would not have been possible without it.

Where the old edition had an unmounted, paper-thin game board the new edition features a thick cardboard mounted board, with a linen-touch coating.

The counters for Dragon Rage have been completely redesigned for this new edition. On the reverse side, we have created high quality versions of the original game counters. This will please those of you who are familiar to the 1982 edition, and have grown fond of the silhouette style that was de rigueur at the time.

The front side of the counters introduces new art, with illustrations from Lionel Liron. They bring the game up to date for the current crowd of gamers.

The new counters are also bigger than the old edition's, thicker, with rounded corners, and of course they have that nice linen finish that you have grown fond of.

The new edition also introduce player aids for easy tracking of the monsters wounds and statistics during play. No-one wants to check small square boxes on a black-and-white sheet of paper anymore! 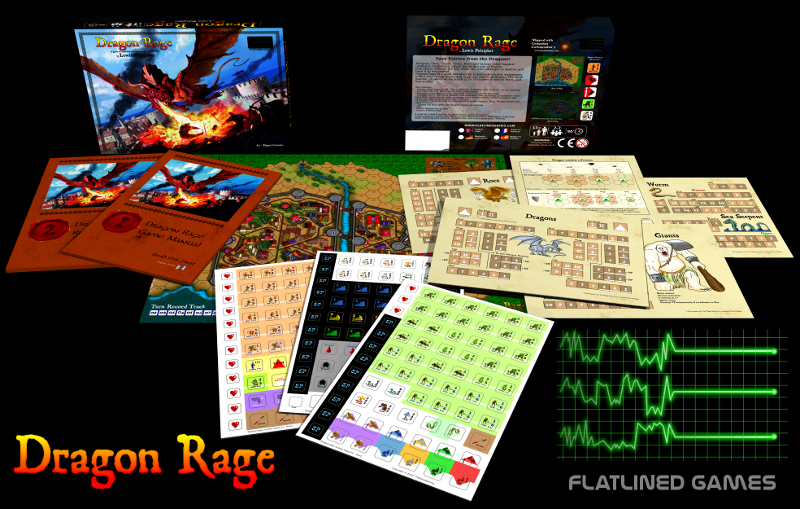 Each game box contains the following :

Feel free to download and read the games rules. This is the best way to assess whether Dragon Rage is a game for you and your fellow gamers!

Click on the links hereunder to download the game rules in PDF format. You will require Adobe Acrobat or a pdf-capable viewer to read these documents.

Dragon Rage on the web

The nice folks at http://www.boardgamegeek.com have put online this nice video :

Please ask your questions on the Boardgame Geek forums for the game, we'll reply there.